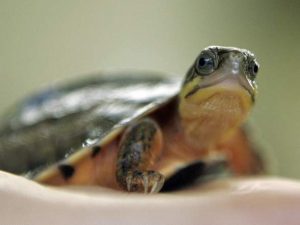 At this time of year, many parents consider giving pets to their children with the warning  “a pet is not just for Christmas”.. and among those pets for consideration are turtles. The dry-land species include the small box turtle which grows 5-6 inches long and costs between $30 to $75 (€ 27.53 to € 68.80) so dealing in this market can be lucrative for those providers. But there ways of making money the easy way and there are ways of making money the hard way.

Appreciate the plight therefore of turtle smuggler Kai Xu and the method he chose to use in the operation. He was caught at a US border crossing with 51 turtles taped underneath his trousers and has admitted smuggling charges involving more than 1,000 of the reptiles. He was stopped by Canadian border authorities as he drove back to Ontario.

Apparently strange “bulges” in the 27-year-old’s clothing gave the game away – and now he has pleaded guilty to 6 offences in the lucrative smuggling scheme in a federal court in Ann Arbor, Michigan. Kai Xu had ordered the turtles online and would travel to Michigan to take them back to his home in Canada, or ship them to China. Prosecutors said Xu‘s “staggering” turtle shipments could earn him between $30,000 (c. € 27,500) and $125,000 ( c. € 110,100).

Xu had been under surveillance in the weeks leading up to his arrest near Detroit. Wildlife agents observed him collecting a box at a United Parcel Service facility before disappearing behind some lorries only to emerge with “irregularly shaped bulges” under his tracksuit bottoms. Xu was stopped by Canadian border authorities as he drove back to Ontario with the 51 reptiles taped to his legs, including box turtles and terrapins. Reptiles had also been hidden in shipments of corn flakes and boots, the court was told.

He faces a maximum of 10 years in prison.