A diamond for the daughter 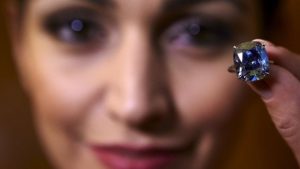 A 12.03-carat blue diamond has been auctioned at Sotheby’s in Geneva for $48.4m (€ 42.83m) to a Hong Kong tycoon. Joseph Lau confirmed he bought the ring-mounted, cushion-shaped stone for his daughter, renaming it “Blue Moon of Josephine” after her.

He is also confirmed as the buyer of a 16.08-carat pink diamond, which Christie’s sold for $28.5m on Tuesday. Lau, a convicted property billionaire, has a history of buying precious stones for his daughter. In 2009, he bought another blue diamond for her – the 7.03-carat “Star of Josephine” – paying what was then a record $9.5m. The pink diamond purchased earlier this week has been renamed “Sweet Josephine”, a spokeswoman for Mr Lau told John Lowe the Money Doctor. Last year he was sentenced to five years in jail in Macau for corruption, but has avoided prison by not visiting the territory. There is no extradition treaty between Macau and Hong Kong.

Two bidders were locked in a telephone bidding war for eight minutes before the hammer went down on Wednesday’s sale, correspondents say, with the jewel not exceeding its pre-sale estimate of $35-$55m. The diamond was found in South Africa in January last year and its striking blue colour is attributed to the presence of the element boron within its crystal structure. “Blue moon” diamonds are so-called for their rarity, after the expression “once in a blue moon”. Experts say the market for coloured diamonds has in recent months become increasingly strong, with both blue and pink diamonds attracting a lot of attention in jewel sales in Geneva. Coloured diamonds are among the rarest in the world, even ones that are not particularly vivid or clear.

In 2013 a diamond known as the Pink Star was sold for what is believed to be a record breaking $83m (€ 73.45m) – also at a Sotheby’s auction in Geneva. Other major diamonds to sell recently include The Sweet Josephine auctioned in Geneva for more than $28m in November 2015 and a vivid pink diamond auctioned for $17.8m (€15.75m) at Sotheby’s in Hong Kong.

And they say diamonds are a girl’s best friend !