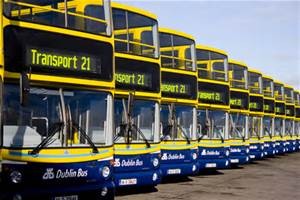 Commuters who use Leap Cards should be able to top-up by touching it against their smartphones in early 2016 if trials being carried out by The National Transport Authority (NTA) are successful.

John Lowe, The Money Doctor welcomes this initiative as a further expansion of mobile technology but as with all such systems he warns that robust security features must be in place. A spokesperson for the NTA said it would hope the option will be released to the general public in January. A trial period has been currently underway with “several hundred” people testing it out for the last three weeks. Depending on feedback from these users, it will be ready for the general public next month.

Leap Card is a re-usable smartcard that enables you to pay for public transport around Dublin, Cork, Galway, Limerick, Waterford and Wexford. It saves you carrying change with Leap Card fares cheaper than cash tickets. Leap Card users in Dublin also benefit from smart discount features such as “fare-capping” – the price is capped so you don’t spend any more than you need to. You can travel for free for the rest of the day or week on the applicable services – Dublin Bus, Luas, DART or commuter rail – once you hit a cap applicable to those services and “Leap 90 Discount” –  when you use Travel Credit to pay for two or more journeys within 90 minutes of each other on Dublin Bus, Luas or DART/ Commuter Rail, an automatic discount will apply to the second and subsequent fares.

Those with an Android phone with version 4.4 (KitKat) and above, a Google Play account and a smartphone with NFC (near field communication) can trial the service. Those with iPhones will not be able to use this method since Apple Pay is not available in Ireland yet  while it also doesn’t allow third-party apps access to NFC.

NFC is a wireless connection used to transfer data from one device to another (e.g., profile information from one Android phone to another) and is also used for contactless payments.

If you’re not sure whether your phone is NFC-enabled, go into Settings and tap on More (found under the Wireless and Networks submenu). Turning on NFC will be one of the options available.If you wish to participate in the trial, you can email LeapNFC@nationaltransport.ie after all, it’ll help your pocket by Leaps and bounds !