A drum roll for Ringo 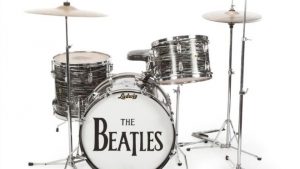 What do you call the name of a person who hangs around musicians ? While the answer is “a drummer” the last laugh is on this much-maligned backbone of bands over the past 70 years.

A drum kit played by Ringo Starr on Beatles hits including Can’t Buy Me Love and I Want to Hold Your Hand has sold at auction for $2.1m (€ 1.92m) this week.

Ringo used the Ludwig kit in more than 200 performances after taking possession of it on 12 May, 1963. Last month, Julien’s Auctions sold a drum head from a kit Starr played on US television show The Ed Sullivan Show in 1964, also for $2.1m. The ex-Beatles drummer has put several memorabilia items up for sale.

Also available is a guitar used by John Lennon, which he gave to Starr in 1968, some of the drummer’s signature rings and his own copy of The Beatles’ White Album, marked as number 0000001. Part of the sale proceeds will go to the Lotus Foundation, founded by Starr and his wife Barbara Bach ( a former Bond girl ), which funds and promotes charitable projects aimed at advancing social welfare.

According to the AP news agency, the Ludwig drum kit was sold to Jim Irsay, owner of the American Football team Indianapolis Colts. The auction took place in Beverly Hills California and also online via Julien Auction‘s website.

John Lowe the Money Doctor said “Diversification is the name of the game – don’t put all your eggs in one basket etc. With the volatility of global markets over the last 20 years, spreading risk is key. Rock ‘n roll memorabilia if bought right can be as effective in minimising risk and potentially creating a multiple return on your investment. If Rory McIlroy’s winning Open golf ball in 2014 can fetch € 52,000 on eBay then all forms of “collectibles” should be considered as part of a “balanced” portfolio.”