4 of the world’s richest men in sport

A rich man is nothing but a poor man with money or so said W.C. Fields but consider these four sporty men and ask yourself were they ever poor ? 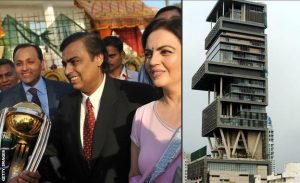 1. Mukesh Ambani the 58-year-old founder of cricket franchise Mumbai Indians, who is worth € 12.5bn, constructed a 27-floor, 400,000 square-foot skyscraper in Mumbai for his wife and three children. Valued at a billion dollars (€ 892million), the Antilla building is thought to be the most expensive private home in the world. There are six storeys of underground parking, three helicopter pads, and a staff of 600 people – sure why not ? 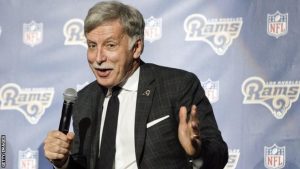 2. Stan Kroenke is a man who I much admire. My being a Tottenham Hotspur supporter would normally have little time for this Arsenal shareholder – he is the Gunners’ largest. But he did nt spend his € 6.5bn fortune on much-needed new players for the club, no he bought a ranch in Texas for € 641m. The property is spread over six counties and Kroenke now owns more than 865,000 acres of land in the United States – an area three times the size of Los Angeles, or four-and-a-half times the size of New York. The Texas ranch alone spans 510,527 acres… well it is in Texas ! Only eight people own more land than Kroenke in the United States. Karry on Kroenke ! 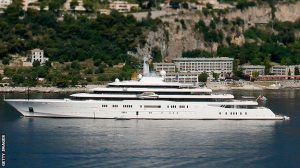 3. Roman Abramovic is another footballing legend. He owns Chelsea Football Club among other things thanks to his € 6.7bn fortune. He has also built up quite a fleet of ships – why have one yacht when you can have five mega yachts including the largest super yacht in the world – the Eclipse? The £1.5bn vessel boasts a 16 metre swimming pool, space for three helicopters and, of course, a dance floor.

And just in case Mr.Abramovic needs a speedier form of transport, he’s also got a customised Boeing 767 private jet which he might have great difficulty in parking at Stamford Bridge

4. Steve Ballmer, the ex-chief executive of Microsoft decided in 2014 to buy a team too. Not just any team, and not just any sport but the Los Angeles Clippers, a NBA basketball team. At € 1.16bn, it was the highest price ever paid for an NBA team, but a mere drop in the ocean for a man worth € 20.5bn.

The 62 richest people in the world own as much as the poorest 3.6billion, a recent Oxfam report revealed. The publication also revealed that the wealthiest one per cent, around 73million out of the 7.3bn people in the world, now own the same as everyone else put together. The new findings were released ahead of the recent annual World Economic Forum of global political and business leaders in Swiss ski resort Davos.

The report found that the gap between rich and poor had widened ‘dramatically’ over the past 12 months. As recently as 2010, the combined wealth of the 388 richest people was needed to equal that of the poorest half of the world, but that number has since plummeted to 80 last year and 62 now.

In a list of the richest billionaires to have made at least part of their fortunes from activities related to the financial sector, US tycoon Warren Buffett comes top with $58.2bn ( € 51.96bn ) in 2014 while former New York mayor Michael Bloomberg is second with $33bn ( € 29.46bn ) in the same year, according to the Oxfam figures.

Although the number of people living in extreme poverty halved between 1990 and 2010 globally, the average annual income of the poorest 10 per cent has increased by less than $ 3 ( € 2.67 ) a year over the past 25 years.

Globally, the super-rich are estimated to have a total of $ 7.6trn (€ 6.79trn) stashed in offshore accounts, depriving governments around the world of $190bn (€ 169.23bn) in tax revenues each year, said the report.

As much as 30% of all African financial wealth is believed to be held offshore, costing $14 billion (€ 12.44bn) in lost tax revenue each year – enough to save four million children’s lives a year through improved healthcare and employ enough teachers to get every African child into school.

Oxfam GB chief executive Mark Goldring said: ‘It is simply unacceptable that the poorest half of the world population owns no more than a small group of the global super-rich – so few, you could fit them all on a single coach.

‘”World leaders” concern about the escalating inequality crisis has so far not translated into concrete action to ensure that those at the bottom get their fair share of economic growth. In a world where one in nine people go to bed hungry every night we cannot afford to carry on giving the richest an ever bigger slice of the cake. Tackling the veil of secrecy surrounding the UK’s network of tax havens would be a big step towards ending extreme inequality. Three years after he made his promise to make tax dodgers “wake up and smell the coffee”, it is time for David Cameron to deliver.’

Mr Goldring said: ‘Ending extreme poverty requires world leaders to tackle the growing gap between the richest and the rest which has trapped hundreds of millions of people in a life of poverty, hunger and sickness. It is no longer good enough for the richest to pretend that their wealth benefits the rest of us when the facts show that the recent explosion in the wealth of the super-rich has come at the expense of the poorest.’

A sentiment this author completely concurs with.