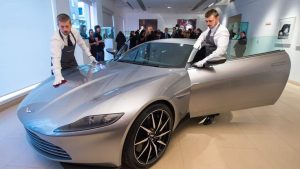 Ten items of 007 memorabilia from the 24th film in the franchise fetched just short of £2.8m (€ 3.589m), with all the proceeds benefiting charities such as Medecins Sans Frontieres (MSF). Other lots included the Day of the Dead costume worn by Daniel Craig (£98,500) and villain Oberhauser’s Spectre nine-carat solid gold ring worn by Christoph Waltz (£32,500).

This author is a big fan of all things James Bond – my older daughter Katie’s Christmas present to me was to fly us over to London to see the Bond in Motion exhibition at a Covent Garden museum – we saw this car too at the exhibition. We had to have a memento…. 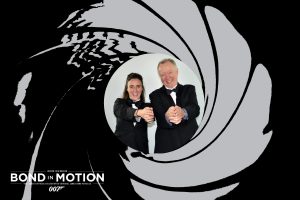 By the way, the Abbey Road album car – a 1967 light blue Triumph Herald estate – sold by David Golding Cars (www.automatics.ie ) here in Dublin last year was bought by top US comedian Jeff Dunham ( a puppet comedian.. one of his puppets is a character called Achmed the Dead Terrorist ) who in turn gave it to his manager based in Los Angeles California. What did the manager do with the car ? Brought it to the first Beatles festival he could find over there and how much did he make after a week from renting the car out for photographs ? $ 88,000 (€ 78,571) ! It can pay to diversify your investment portfolio. Email me for my article on Classic Cars.