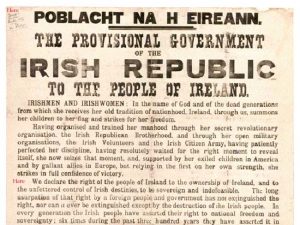 A rare original copy of the Easter 1916 Proclamation of the Irish Republic went up for sale in a Sotheby’s auction in London yesterday and was expected to sell for somewhere in the range of £120,000 (€ 162.8K). Instead it went for an incredible £300,000 (€ 407K) in a sale that defied all expectations and to an unidentified buyer who bid by telephone.

This particular copy has never appeared on the market before and was acquired by Sotheby’s from a descendant of the original owner, a Dublin resident at the time of the 1916 Rising. Although unsigned, the document is still one of just 50 existing copies of the Proclamation, a historical document that Sotheby’s describe as the “most important document of the Irish Nation.”

It is believed that 1,000 copies of the Proclamation were originally printed in Liberty Hall in 1916, most of which were lost during the events of the Rising. There are now an estimated 50 surviving copies, 25 of which are in museums and the rest of which are privately owned. The document, 30 inches by 20 inches in size, is housed in a specially made portfolio box and has sustained minimal wear and tear with some creases along vertical and horizontal folds.

The 1916 Proclamation was read from the steps of the GPO on Sackville (now O’Connell) Street on Easter Monday, April 24, 1916, by Pádraig Pearse, a leader of the Easter Rising and one of the seven signatories of the Proclamation. The other signatories included Thomas J. Clarke, Seán Mac Diarmada, Thomas MacDonagh, Eamonn Ceannt, James Connolly and Joseph Plunkett.

It is believed Pearse wrote the document, described by Sotheby’s as “as a moving symbol of the violent events of Easter week 1916 and those terrible days,” with amendments possibly made by the labour leader Connolly and McDonagh, who is widely regarded as the mastermind behind the Rising. “Pearse himself was a poet and writer,” writes Sotheby’s, “and the text mingles lofty, deftly expressed idealism with Christian Socialist principles.” Unfortunately, the original document did not survive the destruction of Easter Week 1916.

The leaders had originally planned to print 2,500 copies of the document in Liberty Hall, but difficulties in its printing meant that only 1,000 were eventually produced. Many of those copies were lost when Liberty Hall was stormed by the British. These copies of the Proclamation were produced by three men: Christopher Brady, the printer, and two compositors, Michael Molloy and Liam O’Brien. It is reported that the men were essentially kept under arrest by Pearse so that it would appear they were working under duress if the base was stormed by the British Army.

The popularity of copies of the proclamation at auction has varied through the years, reaching its peak during the years of the Celtic Tiger. The selling price also varies depending on whether the document is signed or not. Several copies had been signed by its printers, while others were signed by several rebels. In the past ten years, six copies of the Proclamation have appeared in auction, with various levels of success. Just last year, a copy was sold for €90,000 at Adam’s in Dublin having previously fetched €240,000 at the same auction house in 2007. The highest price ever reached for a copy of the Easter Rising Proclamation before yesterday was €390,000 for a document sold in Dublin in 2004, the height of the boom years in Ireland. Maybe the Celtic Tiger is back ?